Dramatic leap forward in time, as the story opens with baby Hazel in kindergarten. She is also narrating, as always, but at this point it almost seems possible she could be narrating in “real time” (still some future tense involved, though). I’m increasingly convinced that the real point of the story is finding out who she is narrating to, in the style of How I Met Your Mother. And it’s working for me: now that she’s gotten older, she’s become an active participant in the action, instead of only being an escapee or kidnap victim. Hazel’s grandmother is in the detention center on the planet Landfall with her, but every other important character is converging there, intending to rescue her. The two journalists who were bound to keep Hazel’s existence secret have been freed by the death of freelancer The Brand. In their search they meet up with her brother The Will, who has resumed his vendetta against former prince Robot IV. Alana and Marko recruit Robot IV to help them gain entrance into the prison. In the end the family is reunited, but once again on the run. And Alana is pregnant again! The story is certainly not static, at least read in large chunks like this.

The final arc of this human/android love story begins with Alex and his android Ada trying to keep a low profile, hoping that the authorities will not make the connection between Ada and the woman in all the news stories. The government’s Operation Avalanche to find sentient AI is ramping up, and there’s hysterical fear of AI among some of the human population. So the inevitable run from the authorities happens, and does not end well for the couple. That climax occurs at the end of the fourth issue in the collection, leaving the fifth and final issue to wrap things up. One possible ending–Alex and Ada escaping the authorities and starting a new life in Canada–had already been closed off. So Alex gets sent to prison for 25 years, despite the court  finding him not guilty of breaking the AI sentience laws. Ada was treated like evidence, so her condition is unknown. Then there’s a quick 25-year montage in which sentient AIs begin to gain legal status, and Alex serves his entire sentence. It’s a little fast, but there’s still one final question that must be resolved. A satisfying conclusion overall.

By now you’re either reading this series or you’re not. The layering of timelines has become hard to keep track of long ago, although I found this “run-up to the Season 2 finale” reasonably easy to follow. But I’ll admit I referred to the Wikia website to clear up questions about who the characters are–there are several that look alike enough to cause confusion–as well as when they were seen previously. It could be argued that not enough happens in these four issues, but they are rich in backstory. Casey’s challenge to the favorite in the Student Council elections begins the collection, but it’s just prelude. The rest of the stories center on Jade’s history (especially her apparent resurrection of her mother), Ike’s relationship to his father, and Irina in the past and present. They all lead to the finale in Issue #50. 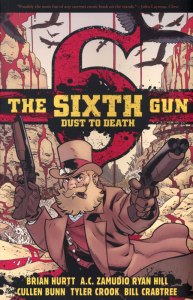 This spin-off collects two three-issue miniseries. “Valley of Death” was written by regular series artist Brian Hurtt and illustrated by A.C. Zamudio, who is new to the Sixth Gun universe. Zamudio’s style is compatible with the general look of the series, albeit a little looser. I found the story a bit hard to follow, but I don’t think the problem was the art. The story involves Kalfu (the keeper of the crossroads) and a Native American war party out to close the door to Death’s realm, which has been left open by a magic rite. So it doesn’t involve the Six directly, and the action gets pretty abstract at times, as tends to happen when the action takes place in spiritual realms. “Dust To Dust” was written by regular series writer Cullen Bunn, illustrated by regular fill-in artist Tyler Crook, and colored by regular colorist Bill Crabtree. So it’s really got the look and feel of the series. The lead character is Billijohn O’Henry, who was the first major character to die in the main series. He’s remained active even in death, but it’s nice to see him alive and adventuring on his own–Drake Sinclair also makes a brief appearance. Billijohn’s mission is to save his ailing daughter Sally, which brings him into contact with some magical items (including the Fourth Gun, which raises the dead).

This site uses Akismet to reduce spam. Learn how your comment data is processed.